I have not written this year. Do not mistake that for saying that I have not been hiking. I have. And to many exciting and exotic places. I was encouraged to get back into writing after the Mt. Sabinyo trek so here I go.

I did not plan to go on this trip. No specific reason I just did not wrap my mind around going on it but boy am I happy that I went. The adventure began right here on home turf. I made it to the airport for the early 5:00AM flight in good time. I was at the airport by 3:00AM and I am glad that Njeri, my neighbour, had insisted that we get there in good time. No sooner did we get there then I realized I had left my identification card at home, and the immigration guys were too happy to sarcastically tell me, ‘Karibu Kenya’ I was having none of that and quickly hailed a taxi and dashed off home to get my card and was back to the airport in good time. This would definitely not have been the case if the flight had not been at that Godly hour (God had His hand on the timing of the flight-CLEARLY!)

We landed in Kigali International Airport at about 8:00am, after a brief stopover in Entebbe. I was wide eyed and taking in all the sights and sounds of this little gem in Africa. The place is clean and orderly. The motorbikes (bodabodas) follow the traffic lights and the passengers on the bikes actually put on their helmets. I was in awe. Beyond that  Kigali is such a beautiful city- the country of a thousand hills. It truly is breathtaking. First stop was breakfast. We headed to a mall in the city where we had a sumptuous breakfast- the portions were so huge that had we known this, we would have shared the orders.  We took our time having breakfast and bonding with a few Kenyans who have made Kigali their home.

Our destination was Kisoro in Uganda and to get there we had to get to Musanze, a border town in Rwanda, where we would then cross over into Uganda before making our way to Kisoro which is the little village that is at the base of Mt. Sabinyo. I think I should have paid more attention in my intermediary French classes. When we got to the bus park I could hear what was being said but understanding, not so much! Luckily we had a very amazing and funny lady as part of our team, she was able to imitate the local dialect so precisely that she was able to decipher what they were saying and they in-turn believed that she was a local. Eventually we sorted out our transport and off we headed to Musanze. The roads in Rwanda are well constructed, no potholes, proper drainage, lighting, pedestrian and pedal-cyclist paths- such good planning. The rambling hills which were green from the current good rain and the streams and rivers bubbling along; I have not had such optical pleasure in such a long time. The one other thing that stood out for me was the genocide memorial sites that are evident as you move from town to town. On the surface, Rwanda has really come a long way from the horror they underwent more than 20 years ago.

Eventually we got to Musanze where we met up with fellow hikers who were joining us on the expedition. I think the people at the bus park knew we were tourists because the rates that they were quoting to get us across the border were mind boggling! Eventually we decided to use regular transport which gave us the edge of interacting directly with the culture of the place. Something interesting about how they drive in Musanze is that, as much as they drive or are meant to drive on the right side of the road, they actually veer to the left side and only move back to their side of the road when there is on coming traffic. Another thing I noticed is that they would put on their indicators as they passed each other on the road. I tried to ask the driver about this and he fluently explained it all to me in crisp French.

Eventually we crossed the border and made our way to Kisoro and to Amajambere Community Camp for the night. We woke up in the morning excited about our adventure and were ready to hit the trails by about 7:00am. By the time the administration and briefing was done, we started walking at about 7:45am. We were a mixed group comprising of Mountain Slayers Kenya, Mountain Slayers Uganda and some Americans who were syked up for the trip. We set off at a comfortable pace all dreaming of chewing up three summits and eventually arriving at the peak that sits on 3 countries (Rwanda, Uganda and DRC)

Now, I do not like researching in detail about the trail I am going to blaze and the reason is that I do not want to be prejudiced by anyone’s opinions. Someone had mentioned ladders on the mountain but I paid no heed. Well, it is safe to say that I will never look at a ladder the same way AGAIN! After a deceptive easy, leisurely one hour walk, things got real. The incline on the mountain started at a very rapid rate and before I could say Sabinyo, I was on all fours scrambling up the ladders. The crazy thing about this mountain is that you think the ladders are not that many until you realize you are on ladders more than you are on terra firma. One after the other after the other! Because of the rapid ascent and the fact that I was trying out some new eating plan, I got hit by the altitude right in my tummy. Waves of nausea swept over me and I knew that it would not be long before I gave up. Luckily my trusted partner, gadget guy, had me covered and he eventually caught up with me and gave me some mint sweets that helped ease the nausea. At this point I had made it to the first summit and was seriously contemplating turning around. Whether it was a touch of mountain madness or just the euphoria of climbing ladders on a mountain and not actually hiking, I pushed past the pain and made it to summit two and finally to summit three. If I thought the ladders I had encountered were bad, the final set of ladders (like 4 sets of stairs each with about 150 stairs) was gruesome. The cloud cover had descended so low that looking back where I had come from, I could see nothing and looking up into the clouds, I could also see nothing. We rightly named the ladders, ‘staircase to heaven’ because it felt like that is what we were doing.

As I hauled myself up the ladder I questioned my level of sanity at subjecting myself to such an ordeal. Did I actually pay to bring myself to this monstrosity of a mountain? Well, I did. And you know what? The summit was worth it. I think the clouds had descended low to prevent me from seeing the sharp declines all around me, but when I got to the summit, Oh My!! The pain, the sweat, the tears were worth it. The clouds lifted and there was Rwanda, Uganda and DRC to the North, West and East. Such beauty.

This disease that gets me on mountains every so often is a disease that I gladly bear- it is an affliction that I am happy to have. It is a burden that I gladly carry. There is no better way to experience life, to live than to be out in the wild with nature. If you think my story is over, you have no idea. The trip down was filled with laughter and dancing because of what we had just been blessed to experience. 12 hours later we were back in camp and ready to drop into bed. We had another adventure awaiting us the next day. 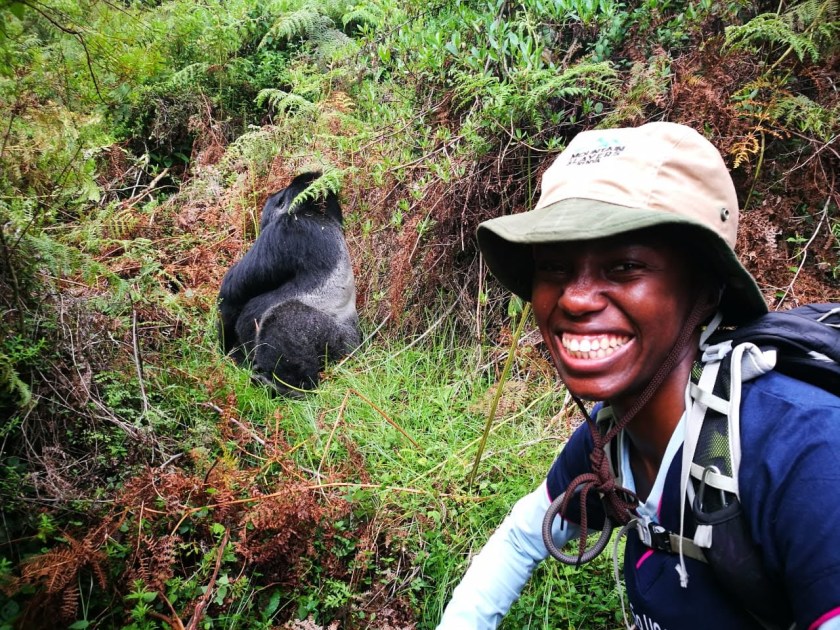 When I heard about gorilla tracking I really had no idea what that meant. I just assumed we would find the gorillas lined up in an organized way and we would smile at them, take pictures and head off. How wrong was I? Gorilla tracking is just that. Literally tracking gorillas in their natural habitat; how they do it is that they have a team of rangers who follow the gorillas on a daily basis and then give direction on where to head to in order to find them. Gorillas share about 95.7% DNA with human beings and are therefore some of our closest relatives in the animal kingdom. It takes about two and a half years to habituate Gorillas. It is a slow and arduous process that requires patience. So there we were at Mghainga Gorilla National Park in the Virunga mountains chasing Nyakagezi gorilla group. After walking in the mountains for about an hour and a half we spotted Mafia, a huge silverback who preened and posed for us from a distance. Eventually we spotted Mark, the dominant silverback of the group and shortly thereafter we spotted the most adorable gorillas- a mother a her 9month old young one. The adult gorillas were not disturbed by our presence and actually allowed us to get really close to them, the baby was shy and kept peeking at us from behind his mother trying to understand who these ‘relatives’ were who were speaking a different language. This was simply one of the most amazing experiences that I have had to date and it is something that I would be willing to do again and again.

After spending enough time with the gorillas, we quickly hiked out of the mountains and headed back to camp to collect our luggage before heading to the border and back to Kigali. The adrenaline rush we had experienced in the three days had me sleeping for most of the journey back to Kigali.

One final thing I needed to do before leaving Kigali was visiting the genocide museum. This is not something I can write about. It is a personal experience that shifts how you view life. Human beings have a lot to learn from the animal kingdom.

For a trip that I never intended to go for, how glad am I that I went on this trip? Everything about the trip was more than I bargained for and I know I am blessed and richer for having experienced three countries in one short weekend.

This is a text widget. The Text Widget allows you to add text or HTML to your sidebar. You can use a text widget to display text, links, images, HTML, or a combination of these. Edit them in the Widget section of the Customizer.
Loading Comments...
%d bloggers like this: